Aquamarine comes from the Latin for seawater and that’s possibly why it is a perennial favourite for us coastal bound Australians. It is the green-blue to blue variety of the mineral beryl. Its colour is usually a light pastel greenish blue. Heat treatments usually provide a more bluish appearance.

It’s the birthstone for March and the gem for the 19th wedding anniversary, which feels like the runner-up for a beryl that should land on a full party-throwing anniversary number. When it sparkles like tropical Nth Queensland clear blue-ish green water it’s good and because, like many beryl it can form large crystals, it can also be cut into sizeable gemstones, perfect for statement jewellery or enormous unwearable gemstones to sit in museums! In 1936 the government of Brazil gave First Lady Eleanor Roosevelt an astonishing 1,298ct rectangular step cut deep blue aquamarine, which is housed at the F.D Roosevelt Presidential Library in NY.

While you are thinking the Roosevelt aquamarine is large it is dwarfed by the ridiculously large 10,363ct 36cm high Dom Pedro Aquamarine at the Smithsonian, which takes the award for the largest faceted aquamarine in the world.
Both gems are from Brazil, which has been an important source of aquamarine for the past two centuries. Aquamarine is also notably found 3000-4000 meters high in the Karakorum foothills of Pakistan and the aquamarine from this area are described as “water clear,” which makes me think of clear blue skies seen through cold thin high-mountain air.

The gemstone has a Mohs hardness of 7.5-8, which is relatively durable for everyday wear. It’s a gem that shows up grime underneath, which will dull its liveliness and colour, so it needs to be regularly cleaned with warm water and soap using a paint brush or soft toothbrush under the setting. 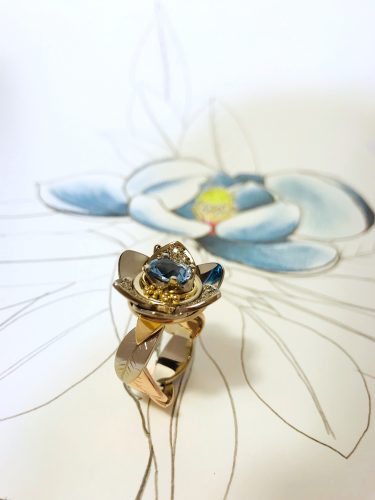 Its watery coolness allows it to sit comfortably in white gold with South Sea pearls, although I’m always tempted to encourage the subtle greenish hue by setting the gem in yellow gold. It will happily team with crisp white sparkly diamonds, but it has potential to accompany deep reds and greens and because it is particularly transparent, I think it contrasts beautifully with an opaque gemstone like opal or jade, it just requires a little imagination.