Diamond is the April birthstone.

I do occasionally meet a customer that refuses to entertain the idea of including a diamond in their jewellery citing feelings that they’re over-rated and pricey. They are expensive, I agree, they have prospered from DeBeers stockpiling and consequent price fixing and some well-crafted marketing campaigns (diamonds are a girl’s best friend 😉) … but putting fashion, marketing and the law of supply and demand aside, a well cut and lively natural diamond is unquestionably magical. A diamond will leap out of a piece of jewellery with scintillating sparkly fire and ferocity that outshines almost all other gemstones, with only some synthetics and imitation gemstones giving them a run for their money in dispersion brilliance.

You can find yourself becoming a little obsessive about wanting to learn how to grade and value them. Diamonds are one of the hardest materials on earth, its name comes from the Greek word “Adamas,” meaning unbreakable or invincible and it’s where we get the word adamant. For minerals, ‘scratch hardness’ is a measure of how resistant it is to being scratched by another mineral. In this measure diamonds are in a league of their adamant own, which is why the majority of the world’s natural diamonds are found in wear resistant coatings for tools used in cutting, drilling and grinding or as additives to abrasives.

Approximately 30% of the diamonds mined worldwide are gem quality, and that’s where the real money and romance harbour. Interestingly, Australia shot on to the world stage in 1983 with the discovery of diamonds in the remote Kimberly region of WA and right up until the Argyle mine’s closure last year it was the world’s largest producer of diamonds, averaging an annual production of eight million carats. Only a fraction of this material was gem quality. Most of Argyle’s gem quality production is in brown diamonds, which in Australia we like to refer to as ‘champagne coloured’. Approximately 1% of gem quality diamonds from the Argyle mine are naturally coloured pink, purple and red. These divine bubblegum pink diamonds didn’t require a South African marketing campaign and stockpile to encourage popularity, the pink shades are genuinely astonishingly rare and the sell themselves. A diamond’s scratch resistance, firey-sparkle and value do make them the go-to engagement gemstone choice. It’s my job to make them not look predictable, which is why I lean towards naturally coloured Argyle champagne diamonds. Combined with coloured golds, the unusual warm honey hues look so delicious against any skin tone. I have been lucky to source some incredible tangerine oranges and vivid sunny yellows, which team fabulously with brightly coloured gemstones to create lolly-shop displays, which is where I am absolutely in my gleeful-element. 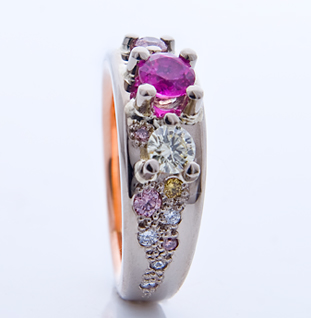